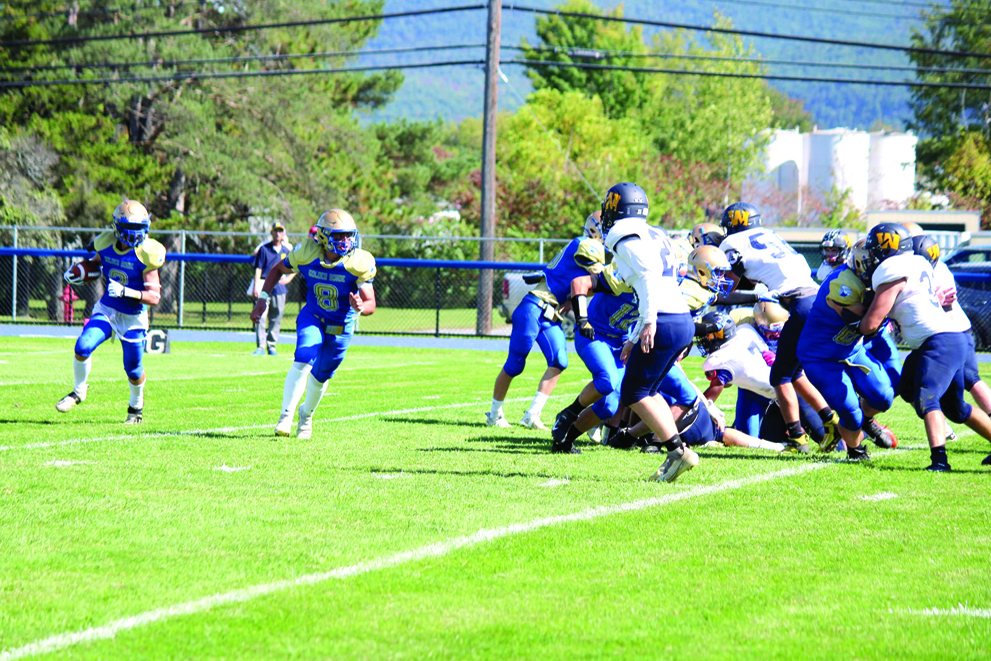 Granville’s Matthew Barlow runs the football against Warrensburg as Alex Torres blocks for him. (Photo by Stacie Arnhold)

After two games were canceled by coronavirus issues, Granville finally opened its season last Saturday against a visiting Warrensburg team playing its fourth game of the season. It showed.

The Burghers jumped out to a 30-0 first quarter lead and rolled over the Golden Horde, 54-0, at Sam Eppolito Field.

After beginning his career in Warrensburg, Dylan Winchell moved to Tennessee before returning to the north country this year. Granville probably wishes he was still in the Volunteer State. Winchell ran for 120 yards and three touchdowns in the first quarter and finished the afternoon with 186 yards on the ground to lead the Burghers’ domination.

Granville head coach John Irion said he felt Warrensburg’s game experience was a factor in the outcome but fell short of using it as an excuse.

“We had 10 days of quarantine where we couldn’t do anything whatsoever,” Irion said. “We haven’t had a game. We had a little bit of a scrimmage Tuesday. We had nothing in terms of hitting and game speed for four quarters.

“They’re on their fourth game and they have a small team so they’re in pretty good shape,” he added. “We’re cramping. We’re having all these things happening. And they didn’t have much of that happening.”

However, Irion said he still believed his team should have played the Burghers closer.

“But, and this is the but, that’s no excuse for us not coming a little bit more,” Irion added.

Winchell began the game by capping off the first drive of the day with a 19-yard scoring run. He may have scored on the first snap of the game but lost his footing and fell on what appeared to be a sure touchdown run. Caden Allen passed to Winchell for the two-point conversion to give Warrensburg the early 8-0 lead.

On the next two possessions, Winchell added to the lead, exploding on a 75-yard run to make it 16-0 after the conversion run by Tristan Hitchcock and scored again on a 26-yard run to extend the lead to 22-0. The conversion try failed.

Tim Kelly added a 26-yard scamper of his own to make it 30-0 after the conversion by Hitchcock.

Hitchcock scored the only touchdown of the second quarter on a five-yard run. He also went in for the conversion to make it 38-0 Burghers at the half.

Kelly and Allen added second half touchdown runs to cap of the Warrensburg scoring barrage.

Granville could only muster 77 yards of offense. Matthew Barlow led the Golden Horde with 51 yards on 12 carries.

Nick Crum had a sack for the Golden Horde. Kevin Morris had a fumble recovery after an Alex Warrington strip.

Granville’s boys soccer team entered last week riding a high after knocking off rival Hartford but the next two opponents proved a bit too difficult for the Golden Horde to handle. After one of their biggest wins ever, Granville dropped Adirondack League matches to Argyle and Bolton-Warrensburg.

At Argyle last Monday, the Golden Horde played the Scots close but Argyle squeaked out a 2-0 victory.

The game was scoreless until two minutes to play in the first half, when Argyle grabbed a 1-0 lead on a Caden Cuthbert goal. Cayden McWhorter picked up the assist.

Granville came out with enthusiasm in the second half, pressuring the Scots early, but Argyle goalie Jared Montello and his defense stifled the Granville attack.

Conner Buck extended the Argyle lead to 2-0 when he hit the back of the net with 26:42 remaining. Derek Liddle had the assist.

Montello finished with two saves for the Scots. Caden Powers had six saves for Granville.

On Wednesday, Sept. 22, Granville traveled to Bolton-Warrensburg looking to bounce back. The Eagles had other plans, however, as they rolled past the Golden Horde 8-1. Five players scored for Bolton-Warrensburg.

Things looked positive for Granville in the first 40 minutes. Connor Farrell scored the first goal of the contest at the 8:43 mark to give Granville the 1-0 lead. William Jennings was credited with the assist.

Things deteriorated quickly for Granville in the second half. AJ Moore got Bolton-Warrensburg on the board off a Louis Lang assist at the 43:54 mark. Less than five minutes later Daalten DeMarsh hit the back of the net to make it 2-1 Eagles and the floodgates were open. Dan Cunniffe picked up the assist.

Cunniffe scored two goals in a little less than 10 minutes to extend the Eagles’ advantage to 4-0. Shane Mowery picked up an assist.

Granville rolls on in field hockey

Emotions were running high last Monday at the Granville field hockey game. Not only was it the first of two Senior Nights for the Golden Horde, but Ed Roszak, who was known as Granville’s “Biggest Fan,” passed away last week and was honored.

Roszak was a familiar figure at Granville’s home sporting events, cheering on the teams while decked out in his Golden Horde attire.

Seniors Katie McEachron, Rachel Beaver, Emmalena Breault and Kali Duel were honored in a ceremony before the contest. The uncertainty with the rise of Covid variant cases in the area precipitated the early Senior Night.

“We had the first of two senior nights tonight,” Golden Horde coach Katie Barber said. “We decided to have one tonight because we want to make sure the kids had one. We honored Ed tonight too.”

On the field, Granville rode the emotional wave to a dominating 5-0 win over outmatched Ichabod Crane.

It was the fourth win in a row for the Golden Horde.

Granville got off to a fast start against the Riders, scoring three times in the opening stanza. McEachron began the scoring at the 10:58 mark off an assist from Melissa Beaver.

Raegan Swain made it 2-0 just 34 seconds later. Haylie Barber assisted on the goal.

Rachel Beaver scored on a penalty stroke with 1:14 to play in the period to extend the lead to 3-0.

“We started off strong with those three first-half goals,” Barber said.

In the third Barber found the back of the cage with 1:40 to play to make it 4-0. Swain added an assist to her stat line.

Swain rounded out the scoring with 8:30 to go in the match. Barber picked up the assist.

Granville outshot the Riders by a whopping 31-0.

Megan Decker earned the shutout in goal. She did not record a save. Junior Kalyn Gould came on to protect the Granville cage in the second half.

After the game during their traditional post game lap, the Granville players all touched a blue folding chair decorated with balloons, flowers, a Golden Horde hat and a picture of Roszak – a perfect tribute to their dedicated supporter.

“I’m very proud of all of the girls,” Barber said.

On Wednesday, Sept. 22, Granville traveled to Corinth and came home with a 4-0 win over the Tomahawks. The victory was the fifth in a row for the Golden Horde.

Granville once again jumped out to a quick start. McEachron scored a hat trick in just the first half to give the Golden Horde a 3-0 lead at halftime. Swain and Duel both picked up assists on McEachron goals.

Swain finished off the scoring with a goal in the second half.

“Decker had an amazing game in the goal with a couple of diving saves,” Barber said. “And Rachel Beaver was key on defense with her aerial lifts on free hits.”

The Granville girls soccer team had a quiet week, playing just one game. The Golden Horde traveled to Corinth on Thursday, Sept. 23, and suffered a 7-2 defeat at the hands of the Tomahawks in Adirondack League play.

Adrielle Lewis had a hat trick to pace the Tomahawks.

Corinth led 3-1 at halftime and used a four-goal advantage in the second 40 minutes to pull away.

The Tomahawks scored the first three goals of the game. Lewis gave Corinth a 1-0 lead off a pass from Maddie DeLisle at the 33:53 mark.

Emily Dingman scored to give the Tomahawks a 2-0 lead with 9:24 to play in the half. Five minute later Idalia Willett scored to extend the lead to 3-0. Alyssa Crossman was credited with the assist.

Hannah Ingleston tried to keep the Golden Horde in the match when she found the back of the net with 3:24 remaining in the half to cut the lead to 3-1.

Crossman scored with 33:36 to play in the second half to give Corinth a two-goal lead once again. Mary Vanderheyden punched in a Maddie Baldes pass less than four minutes later to make it 5-1 Tomahawks.

Laura Arnhold responded for Granville in the 28th minute to reduce the deficit to 5-2. Arnhold’s goal was a picture-perfect blast from 33 yards out on a free kick that beat Corinth goalie Lorelei Peterson.

A pair of Lewis tallies in the final 10 minutes completed the Corinth scoring barrage.

Despite dropping its first match of the year to Whitehall, the Granville golf team earned a win last Monday, Sept. 20, topping Fort Ann-Hartford 4-1 in an Adirondack League match at Skene Valley Country Club.

In an earlier meeting Granville barely won, having to come from behind for the victory, but had no problem this time.

Mason Forbes defeated Granville’s Andrew Rathbun 2-up in a contest between two of the league’s best golfers to hand Fort Ann-Hartford and early advantage.

Logan Harrington nipped Joe Happy, 4-3 to even things up for Granville.

Forbes earned medalist honors by firing a 44 for Hartford-Fort Ann.

It was the annual Assembly Match held during the school day for Corinth’s volleyball team but Granville rolled in last Friday, Sept. 24, and spoiled the Tomahawks’ party with a hard-fought 3-2 win. It is the second win of the season for the Golden Horde.

Corinth claimed the first set but the Golden Horde roared back to claim the next two and were on the brink of the match victory.

The Tomahawks extended the contest with a win in the fourth set before Granville won the fifth to secure the win.

The Granville/Whitehall cross country team competed last Tuesday, Sept 21, in a three-team meet with Corinth and Warrensburg. The race was held over the 2.7-mile Corinth course.

Hayden Sirchia of Corinth took the win in the boys race with a 16:18.

Quinn Johnson was the highest Granville/Whitehall finisher in fifth place with a 17:44. Matt Pietryka was ninth with a 19:05.

On the girls side Granville-Whitehall and Warrensburg both had incomplete teams, allowing Corinth to sweep the event. Granville/Whitehall did, however, have some individual success.

Granville/Whitehall’s Natalie Moran finished fifth at 26 minutes even. Cammi Dekalb was sixth with a 33:04.