He originally was in the real estate business, but he decided to sell his interest and began his folding furniture business in New York City in 1903.

According to the company’s website, the newly named Telescope Cot Bed & Novelty Co. started manufacturing cots and camp stools with “telescoping” legs that presumably gave the new company its name. Telescope’s wood furniture and cots were sold to retail stores.

Eighteen years after it began, the company moved its manufacturing facility to Granville.

Vanderminden was a contemporary of Henry Ford, who established the Ford Motor Co. in 1903, the same year that Vanderminden began manufacturing furniture in Manhattan. Vanderminden used the same mass production techniques Ford used.

“Sometimes I hear that they were friends and sometimes that they were just people in business who knew each other. It’s hard to really know because there’s not a lot of documentation,” said Kait Warren, marketing and advertising manager of the now-named Telescope Casual Furniture and one of Vanderminden’s great-great-granddaughters.

Vanderminden married Emilie K. Heyde in 1895, and the couple had three sons – Henry J.W. Jr., Edwin and Alfred – the second generation of Vandermindens to run the Telescope Folding Furniture Co., as it was known at the time of Vanderminden Sr.’s death on May 18, 1949. His wife died in 1945.

According to his obituary – published in the Granville Sentinel on May 26, 1949 – in addition to being the founder and chairman of the board of directors of Telescope, Vanderminden was a member of the Granville Lodge No. 55 Free and Accepted Masons and of the Glens Falls Lodge Benevolent and Protective Order of Elks. He also was an active member and generous supporter of the Granville Methodist Church.

Vanderminden was an expert fisherman, and on one of his fishing trips he caught a tarpon weighing 109 pounds. He also was a generous supporter of the Emma Laing Stevens Hospital on North Street in Granville.

“I do remember my father (Robert D. Vanderminden Sr.) talking about him, saying he was an inventor type and belonged to an ‘inventor of the month’ club,” current Telescope CEO Kathy Juckett said. “My father remembered seeing his grandfather (the company’s founder) testing or using various inventions.

“He told one story of his grandfather putting on a one-piece bathing suit with an inner tube built into the middle of it and jumping off the dock, only to find himself upside down in the water with his feet sticking up in the air, unable to right himself. Needless to say – thankfully – he was rescued!”

One of Henry J.W. Vanderminden Sr.’s granddaughters, Diane Vanderminden Baker, is 82 and still lives in Granville. She recalled that “Grandpa wasn’t one to mix and mingle. He just kind of did his own thing.”

Baker also remembered that her grandfather always had a boat. However, “When money was real tight in the beginning, they had to sell the boat. So my father (Alfred Vanderminden) – who was around 16 at the time – and grandfather sailed it down the Hudson and the Intercoastal Waterway and sold it to Henry Flagler (a founder of the Standard Oil Co.) in Florida.”

According to Baker, “My grandfather always wore a three-piece suit, even fishing. He was a dude for sure.”

She recalled seeing the 109-pound tarpon stuffed and hanging on a wall in his office in Granville. She also remembered: “When I was a little girl, he liked to take me for a walk and show me off. We lived at 43 East Main Street, and we’d walk down Main Street a little bit and come back. The hardware store had a little red wagon out front for sale, and I’d say, ‘Grandpa, let’s go buy the wagon.’

“Well, I meant B-U-Y, and he understood it as B-Y, so we walked back and forth past that wagon a lot. But he never bought it.”

In the words of the Sentinel’s obituary of Telescope’s founder, he was “a booster for his home town and always interested in the good things that made Granville a better village.” 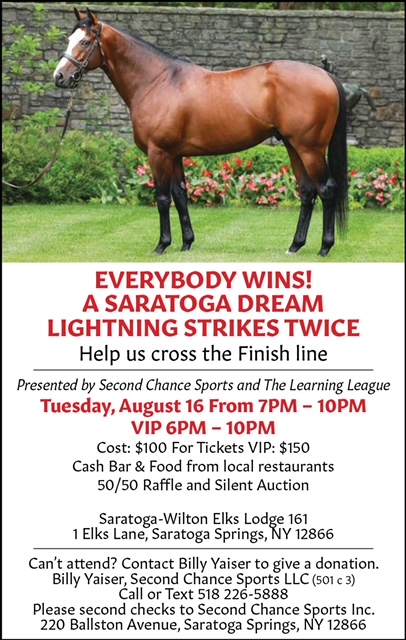