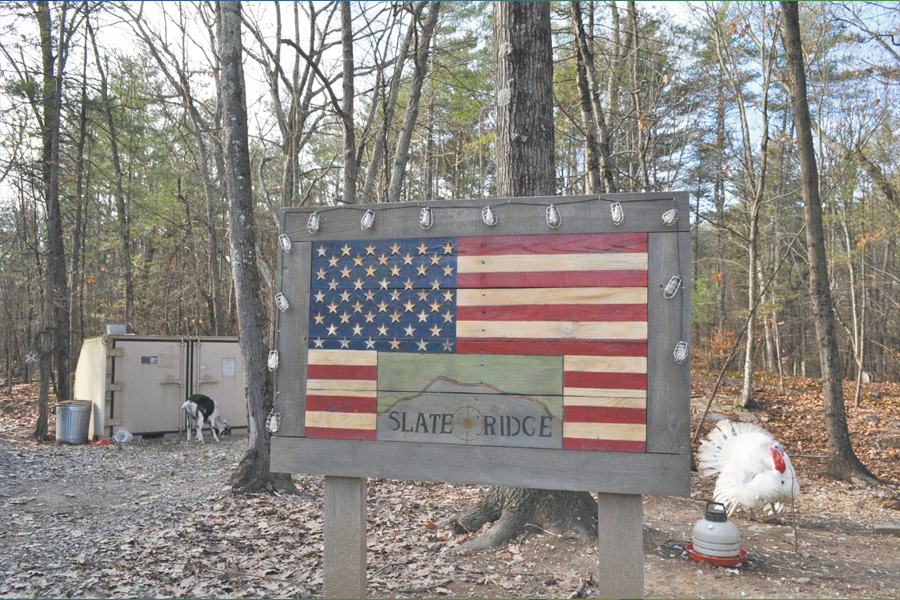 Part one of this series…

A shooting range facility in West Pawlet, Vermont has been both the positive and negative talk of the area in recent weeks and months.

Slate Ridge, owned and operated by Daniel S. Banyai at 541 Briar Hill Rd., is a secluded, off-the-grid location just outside of a slate quarry where Banyai seeks to enhance and provide education on the proper use and defense of firearms free of charge.

“I’m passionate about people learning how to shoot guns properly,” Banyai said. “If you come here, we will never turn you away.”

However, neighbors to Slate Ridge are concerned for their safety, the environment and the value of their property.

“There’s no accountability with them. They defy the law, they spew, they spew hate,” Beth Duquette said. “The declining health and mental stability of all of us . . . He’s taking away our quality of life. He gets the free advertising, we get the scrutiny.”

“If he was out in the middle of nowhere where it didn’t negatively affect the values of our property, I don’t care what he does,” Rich Hulett said. “But, right here where it is, is a problem. There’s children riding horses, riding four-wheelers around here, there’s families, there’s an elementary school half a mile from us.”

“The resolution would come if the town [Pawlet] and the state [Vermont] did their jobs,” John Davis said passionately. “He’s in violation and nobody’s doing anything about it.”

Creating a welcoming atmosphere that provides a relieving escape and opportunity for gun owners and enthusiasts to become proficient in their skills is what Banyai has said his mission has been since 2017.

“I built this place from a reality standpoint,” Banyai said. “Nothing here is on TV. Nothing here is in any textbook. Here are the challenges I’ve faced fighting with a gun and not being able to simulate that or duplicate that at other places. Having said that, I’m not the only crazy guy out there, I’m saying that comically, running around with a gun.

“Any level of law enforcement could be faced with some of the scenarios I’ve been [in]. Make no mistake, if I was doing one thing illegal here, the government would shut me down, it’s as simple as that.”

Banyai said that he has spent the majority of his life behind a gun and has been able to place more than $1.6 million worth of infrastructure on the inside of the security gate through his work as a private security contractor.

According to Banyai, the busiest days at the range are typically Tuesdays, Wednesdays and Thursdays, with 90% of the attendees coming via a relationship on social media. Slate Ridge’s Facebook page has a whopping 3,480 followers at the time of publication.

Throughout the property are signage and postings about security cameras in use, basic rules to follow and abide by and where specific outdoor shooting ranges are set up to go and practice. Individuals must close the safety gates to the respective ranges to inform others that they are actively shooting.

One of Banyai’s greatest achievements he holds dearly is that, thanks to YouTube, he built everything at Slate Ridge with his bare hands besides the roof to the school that hosts lessons and classes for students and attendees. The lecture hall can host about 27 people comfortably.

“I’ve dedicated my life to the preservation of life,” Banyai said. “I’ve risked my life for every penny that has gone into this.”

Outside the school is a safe for out-of-state members to keep their guns stored and protected instead of constantly bringing them back and forth.

“Do militias come here? Yes, they do, but I have no affiliation with them, I just let them train here,” Banyai said. “I don’t look at the word ‘militia’ in a negative context.”

The word “attention” has been a word that can both promote and hinder Banyai’s movement and goals with Slate Ridge.

“Being dangerous is a badge of honor,” Banyai said with a smile across his face. “People fear what they don’t know.”

With the publication of articles from the VTDigger and Manchester Journal, Banyai stated he is more than thrilled with the influx of new members at the range who felt Banyai and current members were “bashed” and “slandered.”

“Since the VTDigger article, we’ve gotten hundreds of new members,” Banyai said. “We are SO grateful.”

Most people would think the global pandemic that has taken its toll over the last eight months would have prevented or limited the number of eager individuals from going to Slate Ridge.

“COVID was another blessing, people just came here rampantly,” Banyai said. “Dozens and dozens more of attendees would come and then complement that with the recent articles [in VTDigger and Manchester Journal], man, we’re putting out 100-plus students a month here that are solid baseline people with gun safety.”

To ensure safety at one of the practice ranges, Banyai installed a 27-foot-tall and 25-foot-wide berm to catch flying bullets that may not hit, or go straight through a target.

“This piece of property is strategically placed in a unique design that when you fire guns here, those bullets and that activity are all mitigated in that one area,” Banyai said.

Banyai is adamant on creating a new addition to his property and expanding every year. He’d like to create a hookup station for RVs traveling from different states to use his range.

“Every year I build something new,” Banyai said.

Banyai was outspoken about the qualifications of members of the Pawlet Select Board for the comments they’ve made in front of him that rubbed Banyai the wrong way, including one man Banyai stated attended Ku Klux Klan meetings and spoke badly about Banyai at those meetings.

Banyai’s three range rules plastered on the shooting deck are pretty self-explanatory for shooters looking to get some practice in.

“You came here alive, leave the same way. Train the way you will fight, and clean up after yourself,” he said. “I keep it as real as possible.”

Look for Part 2: “The neighbors” and Part 3: “Common ground, disagreements and resolution” in subsequent issues of The Granville Sentinel