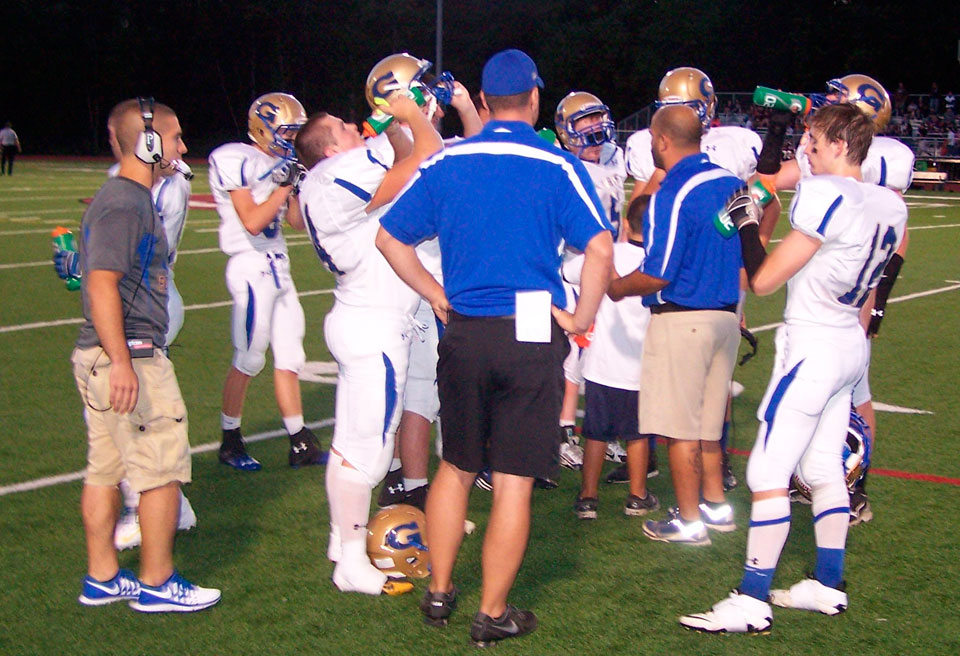 After not commenting for more than two months, Granville’s school Athletic Director Eileen Troy finally broke the silence and voiced her thoughts on the controversy surrounding the appointment of a varsity football coach.
“There’s no question that this is a very difficult situation for everybody,” she said.
“There have been compromises,” said Troy at the board’s meeting on July 26. “Nobody likes compromises.”

Since May 31, when the Granville Board of Education singled out Mario Torres as the sole coach on the meeting agenda who was not reappointed for the fall season, football players, parents and community members have been looking to Troy for an explanation.
School Superintendent Mark Bessen told parents and the media that he needed a recommendation from Troy and high school Principal Camille Harrelson before he could place a candidate before the board for consideration.
Troy and Harrelson recommended three other potential coaches to the superintendent since the controversy began, but the board vetoed all three for the position.
Torres was reappointed last Tuesday during a special meeting by a 6-1 vote.
Troy said her job is to make sure the district’s athletic programs and coaches are the best possible for the students.
“Do I always like what happens in life? No, but we need to do what’s right for kids,” Troy said. “My job, and I think all of our jobs, is to work for the benefit of the student athletes here at Granville.”
The district hired Troy in March 2015 to examine participation rates and identify trends in the program.
“As the Granville director of athletics, it’s my job to find ways to improve,” Troy said.
“I am always going to give you what I think is suggestions for improvement. That’s what you’ve asked me to do and that’s what I am doing,” she said. “That’s where I stand, that’s where I’ve stood. There’s no hidden agenda or anything like that. …We are going to do what’s best for kids.”
Troy took over the position from assistant principal Daniel Poucher, who was appointed interim athletic director after former AD Steve Palmer resigned in December 2014.
“With any great organization … there’s always room for improvement,” she said, citing as examples the New York Yankees, IBM and Granville’s football team.
“I realize that people are not always receptive to change,” Troy added. “Making improvements is not always easy for everyone involved, there’s no question, but the improvements, and I say they are improvements, are necessary to benefit all of our kids in our school district, so this isn’t an easy situation.”
Troy, a 1972 graduate of Granville High School who previously served as athletic director for Greenwich, empathized with board members and meeting attendees.
“We are all from the same town,” she said. “Certain things happen that are difficult for us.”
“On behalf of the student athletes who participate in the football team, my job is to make your experience better and that’s what I will always try to do,” Troy added. “…for all 18 of our sports.”
Phil Berke, of Granville, who attended the July 26 meeting, made a suggestion as to how the community and the school district can “repair itself” after the football rollercoaster.
“I think now, for the benefit of the community, we have to move on,” Berke said. “We have to support Mario and we have to support Eileen because I would hate to see Eileen say ‘who needs this and that’s that…’”
“Thank you, Phil, I couldn’t have said it better,” said school board President Audrey Hicks. She also thanked Troy for the work she’s done in the district.